What can we do to improve health outcomes and reduce costs for very low birth weight (VLBW, birth weight (BW) < 1500g) infants, who frequently have very long stays in the neonatal intensive care unit (NICU)?

These infants are more susceptible to morbidities, including late onset sepsis, necrotizing enterocolitis (NEC), chronic lung disease and severe retinopathy of prematurity. Preventing an infant from acquiring one or more of these morbidities thereby improves outcomes, reduces the NICU length of stay and ultimately decreases costs. One safe, effective and low cost strategy to reduce the prevalence of these morbidities is the use of human milk feedings during the NICU hospitalization. Both the amount of human milk feedings and the critical time periods in which human milk is fed during the initial NICU hospitalization are important. The amount or dose of human milk can be measured in various ways, including the daily dose of human milk (ml/kg/day), the percentage of enteral feedings consisting of human milk and simply whether feedings were entirely human milk or not.1-3 The critical time periods for receiving human milk also vary for preventing different morbidities, and may include days 1-14 post-birth, days 1-28 post-birth or the entire NICU stay.1-3

In a study published in Neonatology in March 2015, we examined the cost savings of human milk in reducing the incidence of NEC in 291 infants from the same prospective cohort study of VLBW infants admitted to Rush University Medical Center between 2008 and 2012.3 We found that infants who received any formula in days 1-14 post-birth were 3.5 times as likely to acquire NEC as infants without formula (p = 0.020), and NEC was associated with an additional $43,818 in NICU hospitalization costs (in 2012 US dollars). We also found that each additional ml/kg/day of human milk in the first 14 days post-birth was associated with a cost savings of $534 in NICU-related costs. That is, increasing the average daily dose of human milk by 17.9 ml/kg/day in the first 14 days post-birth (a 1 standard deviation increase) is associated with a cost savings of $9,559. 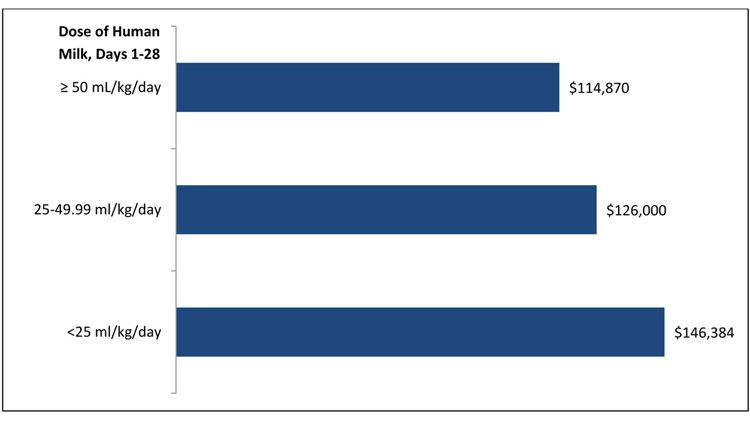 Did you miss part one of Tricia’s economics of human milk blog series?
Read it here: Unraveling the Cost of Very Low Birth Weight Infants

1. Bigger HR, Fogg LJ, Patel A, Johnson T, Engstrom JL, Meier PP. Quality indicators for human milk use in very low-birthweight infants: Are we measuring what we should be measuring? Journal of Perinatology 2014;1-5.

Tricia Johnson, PhD, is Associate Professor and Associate Chair of Education and Research in the Department of Health Systems Management and Director of the Rush Center for the Advancement of Healthcare Value at Rush University in Chicago. As a health economist, Dr. Johnson’s research focuses understanding the underlying drivers of healthcare costs and quality from an economic perspective, with a particular focus on identifying novel, long-term strategies that simultaneously improve health outcomes and reduce healthcare costs. Dr. Johnson is an expert in the economics and cost effectiveness of human milk feedings for very low birth weight infants. Additionally, she is the Executive Director of the Healthy Urban Communities Project, funded by BMO Harris Bank, and leads the program evaluation of the five-year, $5 million project to improve health, education and employment outcomes in medically underserved communities in the South and West Sides of Chicago. She is a 2009 Fulbright Scholar in Austria, where she worked with faculty in the Institute for Social Policy at the Vienna University of Economics and Business. Dr. Johnson has a PhD in economics from Arizona State University, Master of Arts in hospital and health administration from The University of Iowa and Bachelor of Arts in economics and business administration from Coe College.