There has been recognition for several years now that intrauterine and extrauterine growth vary in  premature infants, particularly those born at less than 1500 grams and again, a larger difference for those born at less than 1000 gms.1 Historically, the growth curves used in the Neonatal Intensive Care Unit (NICU) were growth curves based on normal extrauterine growth. It was realized that this resulted in growth failure, defined as growth that falls below the 10th percentile in comparison to normal fetal growth at the same gestational age.2 Furthermore, the nutrition provided for these infants could not sustain the expected intrauterine growth. Infants delivered with birth weights in the 50th percentile would fall to the 10th percentile or below quickly. The nutrition provided must allow for rapid cell growth and body development as well as increased caloric use in infants in the NICU. Optimal nutrition must be started immediately after birth and studies have shown that early addition of more protein to the diet results in more lean body mass (less accumulation of body fat) which in turn decreases the risk of obesity, increased blood pressure, insulin resistance and cardiovascular disease later in life.3 Optimal nutrition and less need for “catch up” growth has also been shown to result in better brain growth and neurodevelopmental outcome.3 Furthermore, early addition of protein to the diet of premature infants promotes better metabolism and results in less hyperglycemia, a problem for very premature infants who are thought to need more calories for growth. Some studies have shown that post-discharge nutrition that is normal in energy intake but higher in protein intake results in body composition with significantly less body fat at 6 months corrected age.4,5 While long-term follow up studies are pending, there is reason to believe that this normal energy/high protein diet may result in less risk of a metabolic syndrome later in life.3

Nutrition provided in the form of total parenteral nutrition is important in the growth and development of very low birth weight infants. However, nutrition is often delivered enterally within 3 to 4 days after birth and sometimes as early as 1 day. This has advantages in the form of promoting gut maturation, prevention of necrotizing enterocolitis and earlier advancement to full enteral nutrition thus avoiding complications of long-term parenteral nutrition like cholestasis and liver failure.6 Several studies support the American Academy of Pediatrics Section on Breastfeeding recommendation that human milk is the gold standard for enteral feedings in both term and preterm infants.7,8 While use of human donor milk is increasingly common in NICUs, scientific evidence demonstrates advantages over bovine formula in most outcomes but still shows mother’s own milk as a superior diet.9,10,11,12 Researchers12 found that infants fed predominantly human milk (greater than 75%) were at greater risk of poor growth than those fed less human milk and this risk was greatest in those fed donor human milk. From these early reports about suboptimal growth with the use of donor human milk, work has increased around optimal fortification of the milk which may still confer benefits against necrotizing enterocolitis and late onset sepsis.8,13 All published studies have combined the use of donor human milk and available mother’s own milk. Some have reported the percentage of mother’s own milk and shown a better effect on growth with greater use of mother’s own milk.8,12

With the known preference for mother’s own milk, both nutritionally and immunologically, there is an emerging body of knowledge about nutrition in this milk. Sauer, Boutin and Kim14 recently published an evaluation of nutrients in mother’s own milk. Clinically, it is assumed that mother’s own milk contains 20 calories per ounce. In their analysis, only 34% of the samples were within 10% of the expected level of calories per ounce with the average being 17.9 calories/ounce. Protein and fat content varied significantly as well with more samples below the expected level than at or above.14 These samples were samples of convenience, ie independent of hindmilk vs foremilk and collected at different times of the day when it is known that nutritional content varies. Other studies have evaluated the macronutrients in preterm, term and donor milk. These were found to have such variability that they cannot be predicted.15 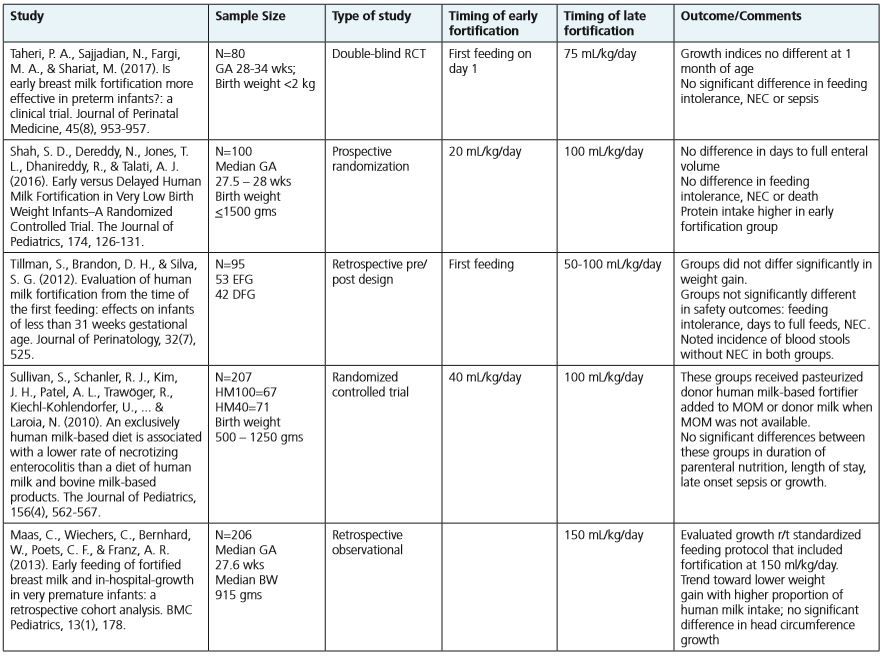 The timing of fortification is also important. It is now well-known that early total parenteral nutrition, including micronutrients and protein is important.1,3,6 Many very low birthweight infants may reach full enteral feeds within 1 to 2 weeks of birth. The traditional timing of adding fortification is when at least 80 to 100 ml/kg/day enteral intake is reached.19 However, given the variability in human milk nutrients and demonstrated slow growth, it may be advantageous to add fortification earlier. Several researchers have evaluated the risks and benefits of early vs late fortification. Some studies evaluated the addition of early vs late fortification while others were retrospective and evaluated growth based on the established or standard practice of fortification. A meta-analysis of available studies has been attempted but the studies were too dissimilar to be useful as a meta-analysis.20 The specifics of each study can be found in Table 1. Indeed, when these studies are reviewed, one can see that there is some variability in gestational age and birthweight amongst the studies. Two studies are of a retrospective observational design, one included a change in practice with comparison of infants before and after this change in practice. When comparing the three prospective randomized studies, timing of the early and late addition of fortification is similar but not exactly the same. Outcomes evaluated for these studies were not exactly the same either. Growth was evaluated as an outcome for all of the studies but at different time points. Finally, one of the retrospective reviews evaluated implementation of a standardized feeding protocol that happened to include fortification at a feeding volume of 150 mL/kg/day, a higher volume than any other study.17 They found that there was a faster weight gain when infants were fed a higher volume of human milk but there was no significant difference in head circumference. This may be addressed by adding fortification at an earlier time point as done in the remaining studies (50 to 100 mL/kg/day). However, in spite of design differences, none of the studies found a higher rate of feeding intolerance (definitions not given in all studies), necrotizing enterocolitis or late onset sepsis (for two of the three studies). Interestingly, and perhaps speaking to the inadequacy of standard fortification practices, early vs late addition of fortifiers to the milk diet did not impact growth significantly in any of the papers reviewed. One author23 concluded that it was not cost effective to add fortifier to the milk diet early on since there were no advantages to growth. Perhaps the use of more targeted fortification such as mentioned earlier in this article would address these growth parameters more specifically while also keeping complications like feeding intolerance, NEC and sepsis at a low rate.

In conclusion, there is a recognized need for the addition of fortifiers to a human milk diet, whether using mother’s own milk or donor human milk in the very low birth weight infant. The timing of this fortification appears to be safe at an early or late time point in infants who are at risk for feeding intolerance, late onset sepsis and necrotizing enterocolitis. However, it is also known that the use of commercially available fortifiers increases the osmolality of the feeding, which may have an effect on at least the occurrence of feeding intolerance and perhaps, NEC.15 Therefore, a more precise evaluation of required nutrients may serve to improve growth while avoiding these risks as well as metabolic complications and obesity later in life. As with many practices in neonatal medicine, more research is needed to evaluate both the feasibility and outcomes related to targeted fortification of human milk.

This article appeared previously in the Spring 2018 issue of Neonatal Intensive Care.

Sandy Sundquist Beauman has over 30 years of experience in neonatal nursing. In addition to her clinical work, she is very active in the National Association of Neonatal Nurses, has authored or edited several journal articles and book chapters, and speaks nationally on a variety of neonatal topics. She currently works in a research capacity to improve healthcare for neonates. Sandy is also a clinical consultant with Medela LLC. You can find more information about Sandy and her work and interests on LinkedIn.