The activity of warming neonatal enteral feeds is ingrained into clinical culture, debated throughout health care settings and investigated with care by dedicated researchers. The bottom line is the same goal: improve the outcome for the patient. This in turn leads to the ultimate warming question: Will warm milk feeds improve outcomes for these medically fragile patients?

Over recent years, a variety of studies have been conducted to scrutinize and verify enteral warming benefits for the neonatal population in the NICU. The focus of these studies is quite often the same: the impact of cold, room temperature or warm milk.

Below are two studies, reduced to one slide each, presenting their core measurement and results points in order to expedite presentation of findings. The goals of each study and final outcomes are discussed, followed by a key statement from each.

Study #1: The Effect of Formula Temperature on Neonatal Body Temperature 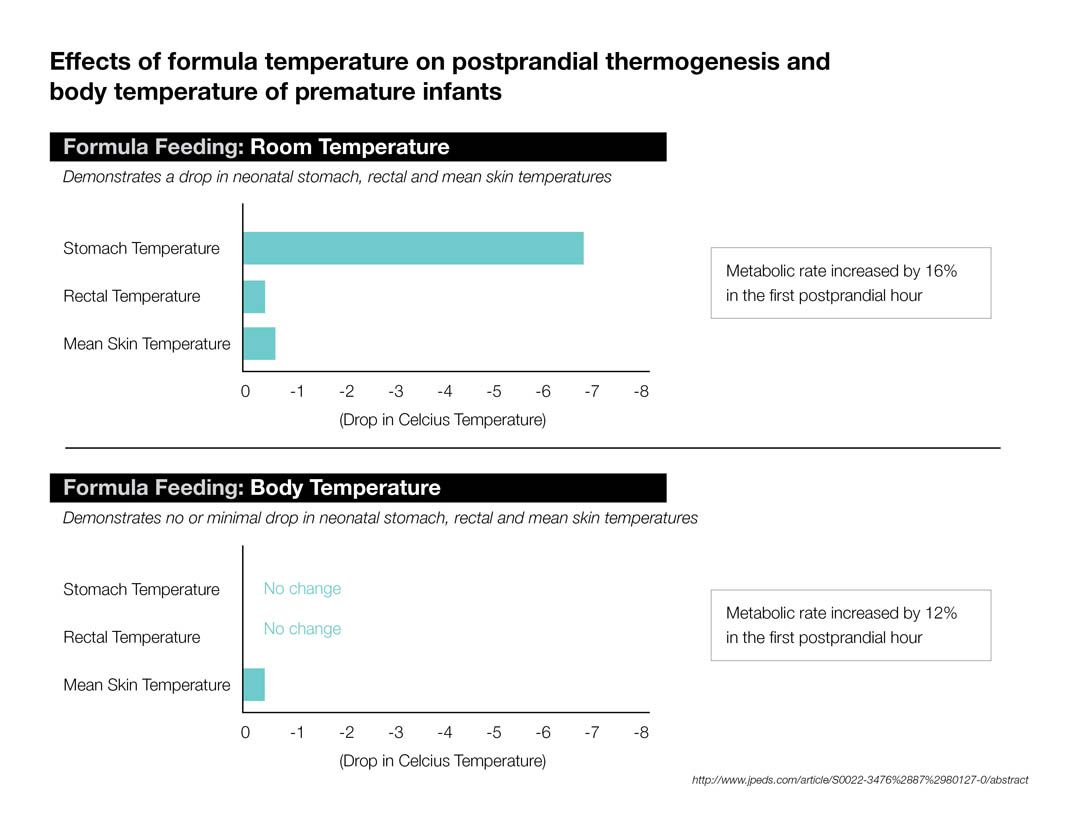 One standout, which may appear trivial at first, is the formula temperature impact to metabolic rate in the study subjects. BMR (basal metabolic rate) is the daily amount of energy expended by the body. It is impacted by a variety of things, such as diet-induced thermogenesis, physical activity and energy for new tissue synthesis. In these study subjects, diet-induced thermogenesis was a specific data reference.

The room temperature formula feed had a 16% increased impact on metabolic rate, an indicator of how much energy was required for the infant to digest the feed. The issue is these infants need every bit of energy they can produce for improved health and growth. BMR includes energy requirements for cellular and tissue processes, and a negative impact could slow recovery and growth time. BMR can also be impacted by disease or illness when considering the critically-ill infant, as observed by Martin, Fanaroff and Walsh in their book, Neonatal-Perinatal Medicine: Diseases of the Fetus and Infant. “Little is known about this component in neonates, but it may contribute significantly in neonates with fever, sepsis, and chronic hypoxia,” they state.  This all leads to the ideal of reducing negative impact to a patient’s BMR, particularly if they are already in a vulnerable state of added illness. The body temperature feed had a lower metabolic rate impact (12%), indicating it required a bit less energy to process the feed and more effectively conserved energy for tissue growth and overall health. This difference may not appear large in the grand scheme of things, but for these tiny babies, it may, in fact, be clinically significant.

This study was very small, with only 9 babies included.  A much greater number would be required to show significance when the actual difference is quite small.  However, the specific drop in stomach temperature may have clinical implications in other ways not studied in this research.  The article points out that a drop in blood flow to the intestines as may happen with a drop in temperature could play a role in feeding intolerance and necrotizing enterocolitis.  This has not yet been well studied either.

Most NICUs do not actively warm formula feeds, yet studies such as this one seem to indicate it might be a worthwhile clinical practice to pursue, or at the very least, continue to study for additional insight. Additionally, one could reasonably conclude warmed breast milk would offer the same body temperature and BMR regulation assistance as well.

The study closes with, “The effects of feed temperatures below room temperature were not studied, but it remains possible that cooler feedings might produce even greater body cooling and a greater thermogenic response.”

Study #2: The Effect of Feeding Temperature on Feeding Tolerance

This second study, conducted by Stanford, was an effort to understand how milk temperature would impact feeding tolerance and digestion. Would residuals show a variation based on temperature of delivered milk? In order to test their theory, they gavage-fed their test group every two hours and measured gastric residuals just prior to the next feeding. The results seemed fairly clear: 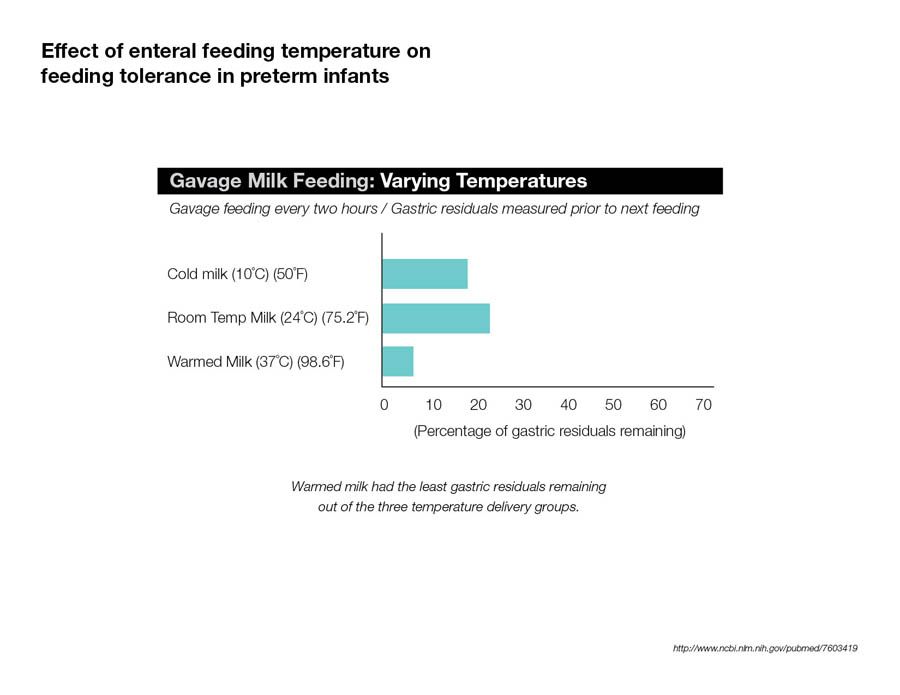 Preterm infants need calories and nutrition to grow. When delivered at a less-than-optimal temperature, a reduction in nutrient absorption or digestion could occur. Studies such as this one allow clinicians to consider how enteral warming decisions might affect patients’ growth and healing throughout their hospital stay.

In conclusion to their study, the authors stated, “Warming milk to body temperature may promote greater feeding tolerance in the VLBW infant (< or = 1,500 gm).”

For these two warming studies, results point to warming formula or breast milk in order to benefit neonatal patients, specifically preterm infants. Based on the above information, is it possible that warming formula could benefit neonatal patients just as well as warming breast milk? This is an interesting question to ponder and needing additional study, especially considering that warming enteral feeds has no negative impact on nutrients when performed properly. It certainly seems more likely that “improving patient outcome” is clearly attainable when considering temperature delivery of a neonatal enteral feed, whether formula or breast milk based, and additional studies could show important information to benefit NICU patients in the future.