Very low birth weight (VLBW; birth weight (BW) < 1500g) infants are some of the most expensive patients in a hospital. Based on data from the Agency for Healthcare Research and Quality, the “typical” or average patient (excluding neonatal and maternal care) cost $12,069 (in 2014 dollars) and stayed 4.9 days in 2012.1 The “typical” or average VLBW infant cost $131,472 and stayed 55.5 days – more than ten times the cost of the average hospitalized patient. What drives the initial neonatal intensive care unit (NICU) cost of care for VLBW infants? An understanding of what is meant by “costs” is important to answering this question.

Is there really a difference between healthcare charges, payments, and costs, or do they all translate to the same thing – how much is spent for healthcare? These terms are often used interchangeably, but each term has a specific meaning in the economics world.

Payments are the amounts that are paid or reimbursed to the provider by the payer (insurer or patient). There are a number of different models for determining reimbursement or payment rates. The amount paid or reimbursed for care in the NICU may be negotiated prospectively (e.g., annually) between the insurer and provider (hospital or physician group). Some insurers have a fixed fee schedule for which they reimburse providers for services. Other insurers pay on a per day or “per diem” basis. The per diem reimbursement generally depends on infant acuity and the length of hospital stay.

Costs represent the resources used by the provider to deliver those services. The resources used include both direct costs – resources that are specifically used in the treatment for the patient – and indirect or overhead costs. Direct costs include nursing care, laboratory tests, diagnostic and imaging exams, therapies (e.g., occupational, physical, speech), surgeries, pharmaceutical products and other services. Indirect costs include the overhead costs that are needed for all patients – finance, housekeeping, medical engineering and maintenance, and other non-patient services.

The perspective of healthcare spending is an important consideration. Consider the cost for a VLBW infant who is initially hospitalized in the NICU. The cost to the family is the amount the family pays out-of-pocket for the medical care (e.g., copayments, coinsurance) as well as indirect, non-medical costs. These indirect costs may include the opportunity cost or cost of the time spent away from work at the hospital as well as out-of-pockets costs for transportation and other expenses. The cost to the hospital is the value of the resources used to deliver the care – the nursing care, surgical treatments, diagnostic exams, therapies provided, laboratory and pathology tests and other services. The cost to the physician is the value of his or her time spent providing care.

There are two general approaches to calculating costs. The first is a macro-level approach that translates charges into estimated costs using a ratio of costs-to-charges. Medicare calculates a cost-to-charge ratio for hospitals based on the Medicare operating costs and Medicare covered charges. The ratio is common to the hospital rather than for specific departments or types of patients. The costs reported at the beginning of this blog for the “typical” patient compared with a VLBW infant in the NICU were calculated using hospital-wide cost-to-charge ratios. The second approach is a micro-level (or cost accounting) approach where a hospital calculates the cost of each of the individual resources used and sums the costs of the resources used during a hospital stay to calculate the total costs. The second approach is more accurate and provides granular information on the costs of different types of services used, however, these micro-level data are not widely available across hospitals. In lieu of the detailed, cost accounting approach to calculating costs, the cost-to-charge ratio approach is often used.

It is not surprising that chronic morbidities, such as brain injury, necrotizing enterocolitis (NEC), bronchopulmonary dysplasia and late onset sepsis increase the cost of care for VLBW infants, because these infants have longer lengths of hospital stay than infants without the morbidities, but what is the incremental cost of treating these morbidities? In a study of VLBW infants born between July 2005 and June 2009, my Rush University colleagues and I evaluated the marginal cost, or additional cost attributed to each of these morbidities, after controlling for infant characteristics.2 After accounting for infant sociodemographic characteristics, birth weight and gestational age, we found that late onset sepsis increased the cost of the initial NICU stay by $12,022 (in 2014 US dollars), brain injury by $14,405, NEC by $18,460 and bronchopulmonary dysplasia by $37,739. Having all four of these morbidities, however, had an effect that was more than simply summing the costs of the individual morbidities. For infants born at 1250-1499g BW, the marginal cost of having all four morbidities was $68,676 (in 2014 US dollars), and increased to an additional $148,946 for infants born at <750 g BW.

One low cost strategy for improving health outcomes – and reducing NICU costs – is the provision of human milk to newborn VLBW infants. My next blog will review the evidence on cost savings associated with human milk for VLBW infants in the NICU.

Figure. Comparison of Direct Costs, Infants with and without Necrotizing Enterocolitis, 2012 USD 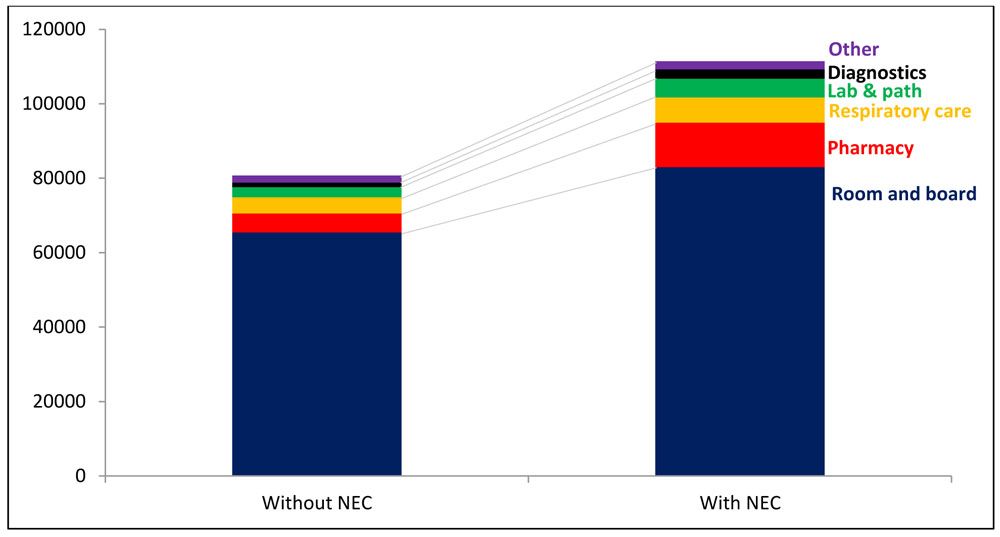 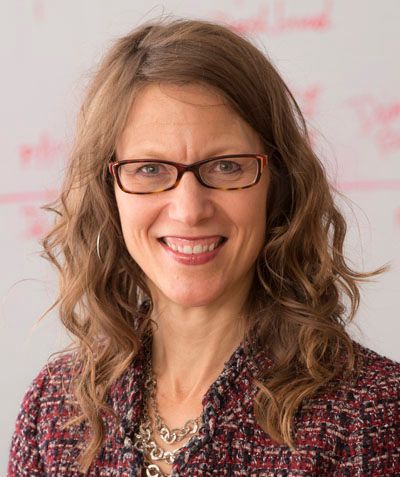 Tricia Johnson, PhD, is Associate Professor and Associate Chair of Education and Research in the Department of Health Systems Management and Director of the Rush Center for the Advancement of Healthcare Value at Rush University in Chicago. As a health economist, Dr. Johnson’s research focuses understanding the underlying drivers of healthcare costs and quality from an economic perspective, with a particular focus on identifying novel, long-term strategies that simultaneously improve health outcomes and reduce healthcare costs. Dr. Johnson is an expert in the economics and cost effectiveness of human milk feedings for very low birth weight infants. Additionally, she is the Executive Director of the Healthy Urban Communities Project, funded by BMO Harris Bank, and leads the program evaluation of the five-year, $5 million project to improve health, education and employment outcomes in medically underserved communities in the South and West Sides of Chicago. She is a 2009 Fulbright Scholar in Austria, where she worked with faculty in the Institute for Social Policy at the Vienna University of Economics and Business. Dr. Johnson has a PhD in economics from Arizona State University, Master of Arts in hospital and health administration from The University of Iowa and Bachelor of Arts in economics and business administration from Coe College.